The Bell Tolls For Thee

What Is The Ego?

It is a false entity. It is not. There are two great falsities in the world. One is ego and another is death. These two things exist not. And they are not separate, they are joined together. They are aspects of the same coin; two aspects of the same untruth. If you have ego, then you will be afraid of death, then death is bound to come - because you are clinging to a falsity. How long can you cling to it? Sooner or later you will have to see that it is false. You can go on avoiding, you can go on delaying and postponing, but not for ever. 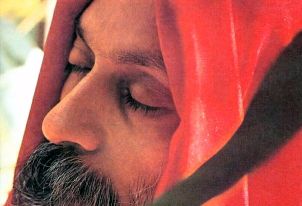 Death is the death of the ego. And ego is not in the first place. So a person who becomes free of ego also becomes free of death. Then there is nobody to die! It is like: a great wave in the ocean believes that "I am, and I am separate from the ocean." This is ego. Soon the great wave will disappear in the ocean. Then it will feel death. And even while it is there, high in the sky, dancing the dance, whispering with the winds, having a dialogue with the sun, still the fear will be there, that sooner or later it is going to die. Because other waves are dying! And just a moment before they were alive.
You are living amongst people who are dying, continuously somebody or other dies. The bell tolls for thee. Don′t send anybody to ask for whom the bell tolls - it tolls for thee. Whenever somebody dies, it brings home the truth that you are going to die. But why did somebody die? Why in the first place? Because the wave believed itself to be separate from the ocean. If the wave knew that "I am not separate from the ocean," where is death? That wave becomes a Sufi. That wave becomes a Buddha. The wave who knows that "I am not separate from the ocean. I am the ocean. So Hum - I am that;" then there is no death.
Ego is a false entity. It is needed - just as your name is needed. Your name is a false entity. Everybody is born without any name. But we have to give a certain name, otherwise it will be impossible in the world - how to call him? How to address him? How to send a letter to him? How to give money or borrow money from him? How to drag him to the court? It will be so impossible if everybody is nameless. It will be sheer chaos! This world cannot exist; it will be a totally different kind of world. And it will be very difficult to remember who your wife is and who your son is and who your husband is. All will be chaos. Names are needed, labels are needed. But they are false. They are utilitarian, but they are not true. When you give the name to the child, you are giving a name to the nameless.
And exactly like that is the ego. The name is for others to use and the ego is for yourself to use. You will have to say ′I′. You will have to say, "I am thirsty." The reality is only that there is thirst. But if you go and suddenly declare in the marketplace, "There is thirst!" then it will be very difficult - who is thirsty? Where is it? You have to say, "I am thirsty." That "I am thirsty" is just utilitarian. In reality all that is is thirst, hunger, love. These things are true, but the ′I′ is just needed to manage your life.
If you understand this, there is no problem. You can use it and you can know that you are not separate from existence. I also use the word ′I′ - Buddha uses it, Krishna uses it, Christ uses it. It cannot be dropped. There is no need to drop it! You just have to see the point that the word is utilitarian, useful in day-to-day life, but has no existential status.
Don′t be befooled by the word. Don′t start believing that the word is the reality. But it happens.

I have heard Charles de Gaulle was a very egoistic person, as politicians are bound to be. A story is told about him: One winter night upon retiring, his wife shivered and said, "My God, it′s cold."
Yielding slightly, de Gaulle replied, "In bed, Madam, you may call me Charles."

People can start believing. Then you have given the word a reality which is not there, which does not belong there.

The ego is just a belief in your specialness, in your personality, a belief in yourself - and the belief is utterly false, not based in truth at all.
I am not. You are not. Only God is. Know it, and then you can use the word. But then it is just a word. It does not denote any reality. Only one is. Many are appearances. Many are false. Falseness consists of many and multiplicity. Truth consists of one.